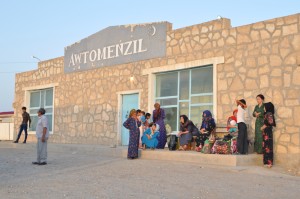 Flat, grey, arid waste lands greet the horizon in all directions. Seemingly motionless, the sun hangs from the skyes, sternly monitoring the sandy soil, incinerating any brave and defiant growth of green. Whatever escapes the scrutiny of the flaming rays is devoured promptly by the camels, these odd, voracious beasts of the desert. Only 70 km south, the shady forests of Golestan are a feverish mirage, that has abruptly melted, consumed by dust and hungry humpy mastodonts. We get off the car and wave a brief and warm goodbye to Shamila and Mehdi, silently sending good wishes to Nima and Saide in Tehran, all of them beautiful friends that have crowned our stay in Iran.

Then we walk, sweat and wonder if space suits would not have fitted better than t-shirts the lunar landscape surrounding the tiny Turkmen border at Godri Olum. In a few minutes we will be jumping into the jaws of another blatantly dictatorial regime. The omnipresent Ayatollah, pious, beardy mullahs, black-cladded ladies and the intangible shadow of the moral police that have permeated the fabrics of a whole society will now be followed by golden statues, monumental personality cult, corrupted paranoid government and Orwellian control. A thorough border check, resembling backpack harassment, threatening the very integrity of our luggage and finally we are through. A cordon of camels graciously roaming the sands and men in military uniforms, slightly confused and with wits evaporated by the heat, reluctantly let us in the last Bolshevik republic. The gateway to Central Asia slowly opens. 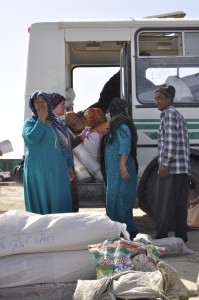 Crouched between boxes of smuggled goods in an old little bus we clumsily try to feel the pulse of the solitude. The Soviet machine clatters purposefully on the bumpy stony roads indifferent to the absence of signs. The sun and wind kindle fires of sand, their dusty smoke invariably aiming to stick up to any uncovered part of one’s body. A motorcyclist donned in a customized helmet – a pillowcase with holes for the eyes – passes by undisturbed in a cloud of dust and fuel exhaust. Loudly laughing ladies, dressed in long and elegant colourful flowers patterned dresses confidently take up on a general conversation with the strangers in stark contrast with the silent covered women of neighbouring Iran that shyly sweep the floor with their eyes. Finally the driver breaks and the door creaks welcoming us to Etrek – a sleepy town on the southern edges of Turkmenistan where the contraband wares find a market. Weak and tired, we slump at the stairs of a tiny shop, next to a huge portrait of smiling President Berdymuhamedov with eyes firmly fixed on us. We engage strategically in an ostensibly unorchestered conversation with the passing by locals aiming to gather as much useful information as possible. Secretive and oppressive, the Turkmen government dislikes independent travellers and allows them only on a few days transit visa; as a result details on everyday life of the country are scarce. 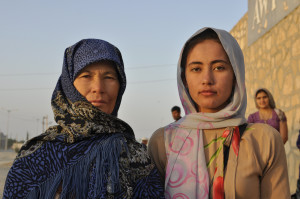 Suspicious, we wonder if there is anything we should be weary of, but the almost idyllically calm atmosphere of Etrek quickly disperses any fears. Several hours later we find ourselves falling asleep in the house of Zolota (Golden in Russian) and her youngest of four daughters whose name, to our dismay, would translate as I don’t have a son (Ogulgerek — ATN). Tea, sweets and a Turkish TV series soothe our tired senses and the giant flowing wave of normality takes over us as the fading orange light of the setting sun closes our eyes. Intense, rough banging on the door abruptly wakes us up. We stare at the darkness out of the window and alarmed follow a muted conversation in the yard. ”The police wants to speak to you.’ – shortly explains our host. 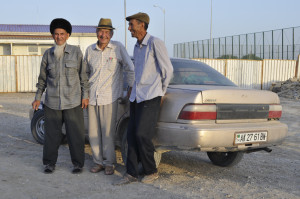 Distraught we rush to meet a casually dressed man who addresses us in sound English – a privilege in Turkmenistan, we learn later on, held only by the immigration police. ‘You might not be aware, but you are not allowed to be in this house’ – begins his grim speech the police officer.’ According to Turkmen constitution, foreigners are not permitted to have any contact with the local population. I assume, that neither you, nor the women who hosts, intentionally broke the law so this time you will get away with it. Tonight, you can stay in the house, but do not do the same thing again, because you do not want us to detain you or deport you. It wouldn’t be pleasant. You are on a 5 days transit visa, but the faster you exit Turkmenistan, the better, so tomorrow early morning make your way north. Good night!’ Abruptly, the policeman turns around and melts into the dark night. Such is the nature of law, that any eccentric absurdity springing from the wild head of men, signed on an official paper, should be observed for. Failing to do so might result in a fair punishment. Stupified, we stand on the threshold, feebly illuminated by millions of silvery, twinkling stars. Like bats in the night, the eyes that follow us have multiplied.

Why are we selling sniper rifles to Turkmenistan? — David Maynier 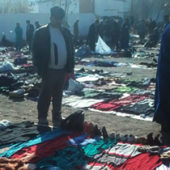 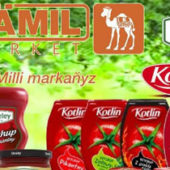 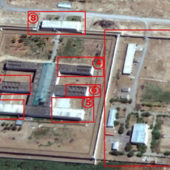