Less than seven weeks after he had imprisoned a Jehovah’s Witness on what his fellow believers insist were fabricated charges, Judge Gaigysyz Orazmuradov of Dashoguz City Court in northern Turkmenistan sentenced another Jehovah’s Witness.

33-year-old Bibi Rahmanova was given a four-year prison sentence for assaulting a police officer and two train station employees, charges she vigorously denied. «This decision is particularly shocking considering that Bibi is the mother of a four-year-old boy and was clearly the victim of police abuse,» Jehovah’s Witnesses told Forum 18 News Service. Rahmanova and her husband were both charged after they were detained for collecting religious literature from the train station. Secret police, ordinary police and a state religious affairs official detained them. Neither the religious affairs official Hudainazar Artykov nor Judge Orazmuradov would discuss the case with Forum 18. Meanwhile, Jehovah’s Witness Merdan Amanov became the sixth known imprisoned conscientious objector when given a one-year sentence in July.

Yet another Jehovah’s Witness has been given a four-year prison term on charges her fellow-believers insist were fabricated to punish her for exercising her right to freedom of religion or belief. Prisoner of conscience Bibi Rahmanova was sentenced on 18 August by the same judge in Turkmenistan’s northern city of Dashoguz who had handed down a four-year sentence on another Jehovah’s Witness less than seven weeks earlier. Criminal charges have also been instituted against Rahmanova’s husband, Vepa Tuvakov, Jehovah’s Witnesses told Forum 18 News Service. If he too is imprisoned, their four-year-old son will be deprived of parental care.

The accusation of assaulting a police officer and two train station employees – which Rahmanova denied – was raised after officials of the Ministry of State Security (MSS) secret police, Transport Police, Police 6th Department and the local Religious Affairs office seized the family as they collected religious books which had been sent to Dashoguz train station for them.

«This decision is particularly shocking considering that Bibi is the mother of a four-year-old boy and was clearly the victim of police abuse,» Jehovah’s Witnesses added. They point out that she was one of the victims of abuses whose cases were detailed in an 11 July complaint to the United Nations.

Another Jehovah’s Witness conscientious objector has been imprisoned, bringing their number to six.

The man who on 20 August answered the telephone of Gurbanberdy Nursakhatov, Deputy Chair of the government’s Gengesh (Council) for Religious Affairs in the capital Ashgabad [Ashgabat], repeatedly put the phone down as soon as Forum 18 introduced itself. Subsequent calls went unanswered.

The following day, 8 July, she filed a complaint with the Dashoguz Prosecutor’s Office against the police. While at the police station, Rahmanova heard the police planning that they would charge her husband with assaulting a police officer, an offence under Criminal Code Article 211 (resisting the police).

Tuvakov was later freed from Dashoguz City Police Station. Both he and his wife had to sign statements not to leave Dashoguz.

The eight-page indictment against Rahmanova – seen by Forum 18 – was prepared by senior investigator Muhammad Jummayev on 5 August. It was countersigned by the head of Dashoguz City Prosecutor’s Office A. Gulyev the following day.

Rahmanova was accused under Article 211, Part 1 and Article 279, Part 2 b (which punishes hooliganism «connected with resisting a law enforcement officer» with a prison sentence of up to five years).

The indictment notes that officers of the Dashoguz MSS secret police had learnt at lunchtime on 5 July that Rahmanova and her husband were due to collect a shipment of books and other religious materials sent by friends in Ashgabad. Together with Transport Police officers, Police 6th Department officers and Hudainazar Artykov, an official of the Religious Affairs Department of the Regional Hyakimlik (administration), the secret police seized the couple and their son at the train station after they had collected the books.

Artykov’s testimony does not reveal how the MSS secret police had learnt that religious books were on their way from Ashgabad to Dashoguz and that Rahmanova and her husband would be collecting them from the train late that evening. Neither Artykov nor the officers who testified to the Prosecutor’s Office explained why they needed to examine religious literature which local people were collecting from the station.

Artykov, echoing the testimony of other officers, alleged that during an altercation, Rahmanova had torn buttons and shoulder insignia from the uniform of one police officer, bitten one of the official witnesses and scratched the hand of the other. Artykov called for her to face punishment.

The duty officer at Dashoguz City Prosecutor’s Office refused to put Forum 18 through to Investigator Jummayev or anyone else on 20 August.

The man who answered Artykov’s phone at the Hyakimlik the same day put the phone down as soon as Forum 18 began asking about the case. Subsequent calls went unanswered.

Rahmanova was arrested on 7 August and taken to the Interior Ministry’s Investigation Prison in Dashoguz, Jehovah’s Witnesses told Forum 18. Her trial was due to have begun at Dashoguz City Court on 14 August, but did not eventually take place until 18 August.

At the trial, Judge Gaigysyz Orazmuradov found her guilty and sentenced her to the four-year general regime labour camp term. «The judge repeatedly interrupted Bibi’s lawyer and would not let her ask questions,» Jehovah’s Witnesses complained to Forum 18.

The man who answered Judge Orazmuradov’s telephone on 20 August repeatedly hung up as soon as Forum 18 began asking about Rahmanova’s imprisonment.

Rahmanova is believed still to be held in Dashoguz Investigation Prison. She is intending to appeal against her sentence as soon as the written verdict is handed down, Jehovah’s Witnesses told Forum 18.

The boy is currently being cared for by his father, Tuvakov, who is also being investigated under the same charges as his wife.

On 11 August, as Rahmanova was awaiting trial, Jehovah’s Witnesses sent a further complaint about her maltreatment to the United Nations Working Group on Arbitrary Detention and the Special Rapporteur on Freedom of Religion or Belief in Geneva.

The complaint was lodged exactly a month after an earlier complaint which had detailed abuse against her and other local Jehovah’s Witnesses.

In January 2013, seven weeks after the UN Human Rights Committee sought a response from Turkmenistan to complaints by 10 Jehovah’s Witness conscientious objectors, about 30 police officers raided the lead complainant’s family home in Dashoguz. Six people were detained, beaten and tortured, one of them severely. In what Jehovah’s Witnesses state was «particularly despicable treatment», one detainee was threatened with being raped on a table in the police station. Three were then fined.

On 2 July 2014, less than seven weeks before Rahmanova was sentenced, the same Judge Orazmuradov had sentenced another Dashoguz Jehovah’s Witness, Bahram Shamuradov, to four years’ general regime labour camp. The 42-year-old Shamuradov was found guilty of distributing pornography under Criminal Code Article 164, Part 2. He rejected these accusations vigorously, insisting files had been planted on his computer after police took it from him.

Judge Orazmuradov took some time to issue the written verdict. In the verdict – seen by Forum 18 – Shamuradov’s testimony denying the allegations entirely is dismissed as «groundless». Although he remained in prison after the sentence, an appeal was sent to the Court on Shamuradov’s behalf on 1 August, Jehovah’s Witnesses told Forum 18. No date has yet been set for the hearing.

Where are confiscated religious books?

Shamuradov’s verdict notes that police seized from him a number of religious books. Along with several unidentified Jehovah’s Witness texts, these also included a named text «What Does the Bible Really Teach?» in Uzbek translation, published in Germany. (Shamuradov is from Turkmenistan’s ethnic Uzbek minority.) Also seized was a 613-page translation of the Bible into Uzbek, printed in Turkey. The verdict says that the books were handed to the local Religious Affairs Department. It does not explain why these books were seized of if they will be handed back.

Because Artykov of the Religious Affairs Department in Dashoguz refused to answer any of Forum 18’s questions, it has been unable to find out why the books were seized, not what will happen to them.

Although Shamuradov had been arrested on 14 May, the verdict also notes that the sentence is deemed to run from 16 May. He had been held in Dashoguz Investigation Prison, but after the sentence he was transferred to the general regime labour camp in the desert near Seydi, in the eastern Lebap Region.

Seydi Labour Camp already holds other prisoners of conscience punished for exercising their right to freedom of religion or belief. These include Aibek Salayev, convicted in Dashoguz in April 2012 on framed charges and sentenced to four years’ imprisonment. He has been repeatedly beaten since his arrest.

The Camp also holds at least five of the six known imprisoned Jehovah’s Witness conscientious objectors to compulsory military service. Three are in the general regime section of the Camp (Amirlan Tolkachev, Suhrab Rahmanberdiyyev and Pavel Paymov). The other two (Dovran Matyakubov and Matkarim Aminov, who are serving second sentences on the same charges) are in the strict regime section of the Camp.

Also being held in the general regime section of Seydi Labour Camp is Dashoguz Protestant prisoner of conscience Umid Gojayev. He was sentenced in 2012 to four years’ imprisonment on charges of hooliganism. His arrest followed an argument with neighbours, and local Protestants insist the criminal charges were brought disproportionately because of his religious beliefs.

The address of the general regime Seydi Labour Camp is:

This punishes refusal to serve in the armed forces in peacetime with a maximum penalty of two years’ imprisonment.

Amanov was tried, convicted and given a one year prison sentence on 7 July, Jehovah’s Witnesses told Forum 18. He was being held in pre-trial detention at Yashlyk, 40 kms (25 miles) south-east of Ashgabad. Forum 18 has been unable to find out if he has already been transferred to labour camp. 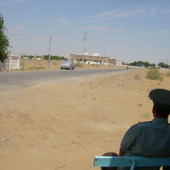