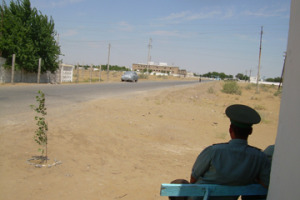 Umid Gojayev, imprisoned on charges of hooliganism which local Protestants insist were brought disproportionately because of his religious beliefs, and Jehovah’s Witness conscientious objector Ruslan Narkuliyev were freed yesterday (17 February), Forum 18 News Service has learnt. Both were released under amnesty from the same labour camp in Seydi in eastern Turkmenistan. «Narkuliyev’s release means that there are no longer any Jehovah’s Witnesses convicted and imprisoned in Turkmenistan as conscientious objectors,» one Jehovah’s Witness told Forum 18. However, Jehovah’s Witness conscientious objector Soyunmurat Korov is being held «against his will» in military hospital in Ashgabat. Meanwhile, five Muslim men imprisoned on charges of religious extremism, were severely beaten on arrival in Seydi strict regime labour camp in early February. One suffered a broken hand, another a broken rib and damage to his lung. Forum 18 has been unable to establish if they were imprisoned for exercising their right to freedom of religion or for committing crimes.

After his release, Gojayev boarded a train for the two-day journey via the capital Ashgabat to return to his wife and three young children in the northern city of Dashoguz, Protestants in Turkmenistan told Forum 18. Narkuliyev has a journey of just 75 kms (50 miles) to his home in Turkmenabat.

Gojayev and Narkuliyev were freed under a prisoner amnesty to mark Flag Day on 19 February. President Gurbanguly Berdymukhamedov signed a decree initiating the amnesty on 16 February, the government website noted the same day.

«Narkuliyev’s release means that there are no longer any Jehovah’s Witnesses convicted and imprisoned in Turkmenistan as conscientious objectors,» one Jehovah’s Witness told Forum 18 on 18 February. «This is the first time for many years and is obviously a very welcome development.»

Six of the eight Jehovah’s Witness prisoners freed under amnesty in October 2014 were conscientious objectors.

Meanwhile, five Muslim men imprisoned on charges of religious extremism, who arrived in Seydi strict regime labour camp in early February, were severely beaten on arrival. Forum 18 has been unable to establish if they – and a group of about ten Muslim men transferred from that labour camp to the high-security prison in Ovadan-Depe in December 2014 – are prisoners of conscience (see below).

Forum 18 was unable to reach the leadership of Seydi strict regime labour camp or the high-security prison in Ovadan-Depe as no telephone numbers for them are made public.

These developments come as police, state religious affairs officials and the courts continue to punish individuals and communities for exercising the right to freedom of religion or belief, with raids, threats and fines.

Soyunmurat Korov became the second known Jehovah’s Witness prisoner of conscience (in addition to Narkuliyev) when he was arrested on 18 November 2014. He refused the compulsory military service on grounds of religious conscience.

However, Korov was then transferred to the military hospital in Bekrewe on the western edge of Ashgabad as he was suffering from an apparent medical complaint. «Korov is being kept for medical observation against his will by order of the investigator and/or prosecutor,» Jehovah’s Witnesses told Forum 18. «We are obviously still very concerned about him and hope that the prosecutor and/or investigator will now take steps to allow him to leave the hospital and return home.»

It remains unclear if Korov will be allowed to return home or if he will face trial for refusing military service as so many other young male Jehovah’s Witnesses have done over many years.

Jehovah’s Witness conscientious objector Ruslan Narkuliyev was sentenced by a Turkmenabad court to two years’ imprisonment in September 2014 under Criminal Code Article 219, Part 1. This punishes refusal to serve in the armed forces in peacetime with a maximum penalty of two years’ imprisonment. Soon after his sentencing, Narkuliyev was transferred to the general regime section of the Seydi Labour Camp in eastern Lebap Region.

Gojayev, the Protestant from Dashoguz, was also held in the same camp. Arrested in April 2012, he was serving a four year prison term imposed by a Dashoguz court in May 2012. His arrest followed an argument with neighbours, and local Protestants insist the criminal charges were brought disproportionately because of his religious beliefs.

In the beginning of February, five prisoners convicted of «Wahhabism» were brought into the strict-regime labour camp in Seydi. From 5 to 7 February, prison guards subjected them to brutal beatings, sources who asked not to be identified told Forum 18. One man suffered a broken hand, while another suffered a broken rib and damage to his lung.

Forum 18 has been unable to find out if the five men were imprisoned for exercising their right to freedom of religion or belief or for committing crimes. The term «Wahhabi» is widely used in Central Asia for any devout Muslim, regardless of whether they do or do not commit or espouse violence.

In 2011 the UN Committee against Torture found that, in Turkmenistan, «persons deprived of their liberty are tortured, ill-treated and threatened by public officers, especially at the moment of apprehension and during pretrial detention, to extract confessions and as an additional punishment after the confession» (UN reference CAT/C/TKM/CO/1 http://www.unhcr.org/refworld/docid/4ef0540f2.html).

Yet violence against prisoners in Turkmenistan continues widely, human rights defenders and exiled Turkmen journalists note. Following his release from labour camp in Bairamali in July 2014 and return to Russia, Stanislav Romashchenko (who had been imprisoned for attempted murder) recounted many cases when prison guards and riot police beat him and fellow prisoners, in a film by the exile Alternative Turkmenistan News.

Fifteen current and former conscientious objector prisoners lodged applications to the United Nations (UN) Human Rights Committee between September 2012 and August 2013 protesting against their imprisonment and maltreatment. The complaints note that especially in the Seydi Labour Camp, where most of the conscientious objector prisoners are held, they were regularly subjected to spells in the punishment cell and some were brutally beaten (see F18News 21 March 2014 http://www.forum18.org/archive.php?article_id=1940).

The family home in Dashoguz of the lead complainant in one Jehovah’s Witness UN complaint was raided by police in January 2013, seven weeks after the UN had sought information from the Turkmen government about the circumstances of the complaint. Individuals were beaten, threatened with rape and fined.

«Wahhabi» prisoners transferred back to Ovadan-Depe

The Turkmen authorities have imprisoned many «Wahhabis» in recent years, many of whom are held in a closed section of the isolated top-security prison at Ovadan-Depe in the Karakum desert 70 kms (45 miles) north of Ashgabad. Again, Forum 18 has been unable to find out if these «Wahhabis» were imprisoned for exercising their right to freedom of religion or belief or for committing crimes.

About 10 Muslim prisoners were transferred in December 2014 from the strict-regime labour camp in Seydi back to Ovadan-Depe prison, sources who asked not to be identified told Forum 18. The men had already served at least six years’ imprisonment (two three-year terms) in Ovadan-Depe until their transfer to Seydi in 2013.

The group’s leader, Ashirali (last name unknown), who is from Ashgabad, was the first to be arrested, in 2008. Two of the others are named Begench and Attou or Ata (last names unknown). The names of the rest are unknown.

The group of Muslims – described as «Wahhabis» – were apparently punished after bullets were planted on them or for resisting an official. Forum 18 has been unable to establish if they are prisoners of conscience punished solely for exercising their right to freedom of religion or belief.

About 120 men accused of being «Wahhabis» were being held in the seventh and eighth blocks at Ovadan-Depe in 2014, Alternative Turkmenistan News noted on 24 August 2014. Like political prisoners held in the desert prison, «Wahhabis» are banned from receiving parcels or visits from relatives, it added. 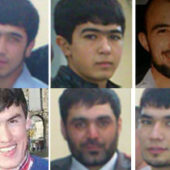