November 14, Amsterdam – Alternative Turkmenistan News presents independent reporting on human rights in Turkmenistan, including state-led forced labor in the cotton sector. With this second report on the 2015 cotton harvest, ATN presents findings from the second month of the cotton harvest.

The government of Turkmenistan forced thousands of citizens to pick cotton during an unusually long cotton harvest this year. The government has coerced employees of wide range of private- and public-sector institutions to pick cotton, including education and health-care institutions, municipal government offices, libraries, museums, meteorological agencies, cultural centers, sports organizations, and utility, manufacturing, construction, telecommunications, and fishing companies. As a result, the government has disrupted many services, including education and health care. Despite rains and freezing temperatures since mid-October, each day officials have been forcibly mobilizing people to the cotton fields on hundreds of buses departing from city centers across the country. 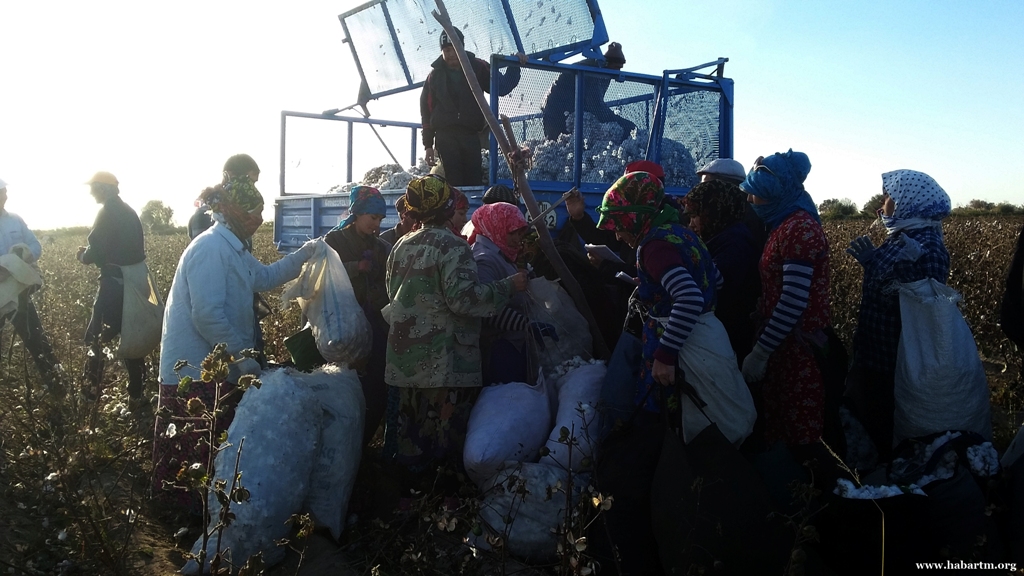 Each year, the Turkmen government forces tens of thousands of citizens to harvest cotton between its ripening in early September and the rains of November. This year, rains began in mid-October, and temperatures dropped below freezing in key cotton-growing districts of Lebap and Dashoguz regions. Almost no one has volunteered to pick cotton in this weather, so officials have mobilized more public-sector workers.

Many public-sector workers have in turn tried to hire day laborers to avoid the field work in the cold, wet weather. Yet even the best offers of 20-25 manats ($5 — $7) per day have failed to attract many substitute cotton pickers. One day laborer explained that take-home pay often falls far short of what is expected:

«On October 21, I was hired by a teacher I know. He paid me 10 manats ($2.85). The bus took us to the fields near the village of Deynau, but we were not able to work properly: after the rains, the fields became impassable, and the cotton was wet. As a result, out of 18 kilograms I picked, the farmer deducted half for dampness, and paid me a little more than two manats. In addition, I managed to get home only after 9 p.m., as the bus was late. My income for the day amounted to 12 manats ($3.5). I am never going there in the rain again,” said the day laborer, a resident of Turkmenabat. 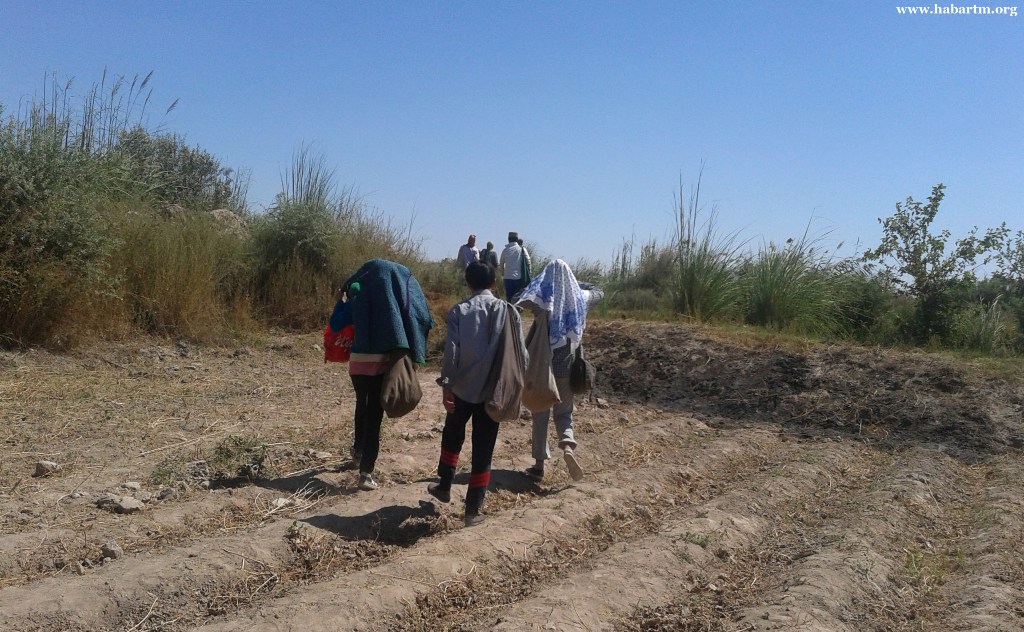 OFFICIALS FORCIBLY MOBILIZED STUDENTS UNDER THE GUISE OF INTERNSHIPS

The Turkmen Agricultural University and Dashoguz Agricultural Institute forced approximately 2,000 students to pick cotton under threat of expulsion from the schools. The school administrators sent the students to cotton fields in Akhal and Dashoguz regions, where both schools own farmland.

While the administrators claim picking cotton is an internship, for the students to acquire practical skills, the students had no choice. Either they pick cotton or they lose their spot in the university. A staff person with the Dashoguz Agricultural Institute reported that the students are not even being provided instruction on agricultural practices, merely instructed to pick cotton.

SCHOOL DELAYED SINCE SEPTEMBER, WITH TEACHERS IN THE COTTON FIELDS

Officials forced teachers to harvest cotton, all but ceasing classes since the beginning of September. School administrators have sent the teachers to pick cotton several days a week throughout the harvest in Dashoguz, Lebap and Mary regions. Throughout the country, teachers report that their options are to work in the harvest, pay a bribe, or lose their jobs. Bribes range from 80-100 manats ($23 — $30), depending on the school, and are paid directly to the school principals. Even during the fall break, principals sent teachers to the cotton fields, unless they paid money.

Teachers reported their frustration that the mobilization to the cotton fields is taking a toll on education. A teacher in Mary region said,

“We haven’t done much teaching since September. By the end of the second quarter, we will have to catch up on what we missed and rush through the topics. This happens every year.” 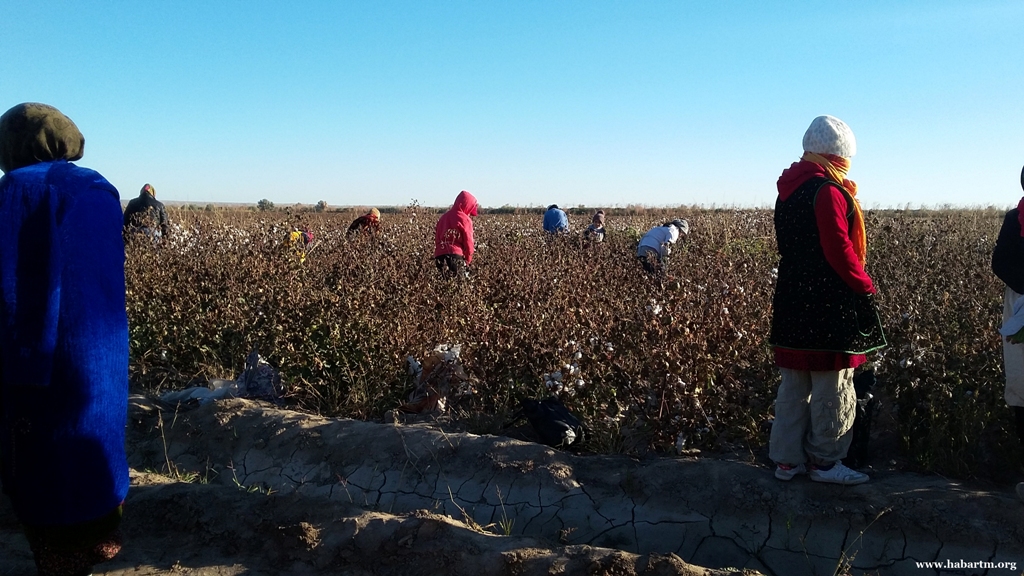 Government-led forced labor of parents to fulfill harvest quotas resulted in children picking cotton in at least one area, the Boldumasaz district of Dashoguz region. Despite the health hazards of picking cotton, particularly for developing children and in frigid weather, parents have brought their children to work alongside them and in some cases sent their children to pick cotton for them. The parents fear losing their jobs if they do not deliver the quota of cotton assigned to them.

An employee of an oil refinery in Dashoguz reported seeing children alongside him and teenagers boarding the buses that depart from the city’s old sports stadium each day. The oil worker said,

“Experienced cotton pickers tell the kids that they should pick cotton from not fully opened pods, because this cotton is wet, and is therefore heavier than cotton in a fully opened pod. The farmer told everyone in the morning that he was after the tons, not the quality of the cotton.” 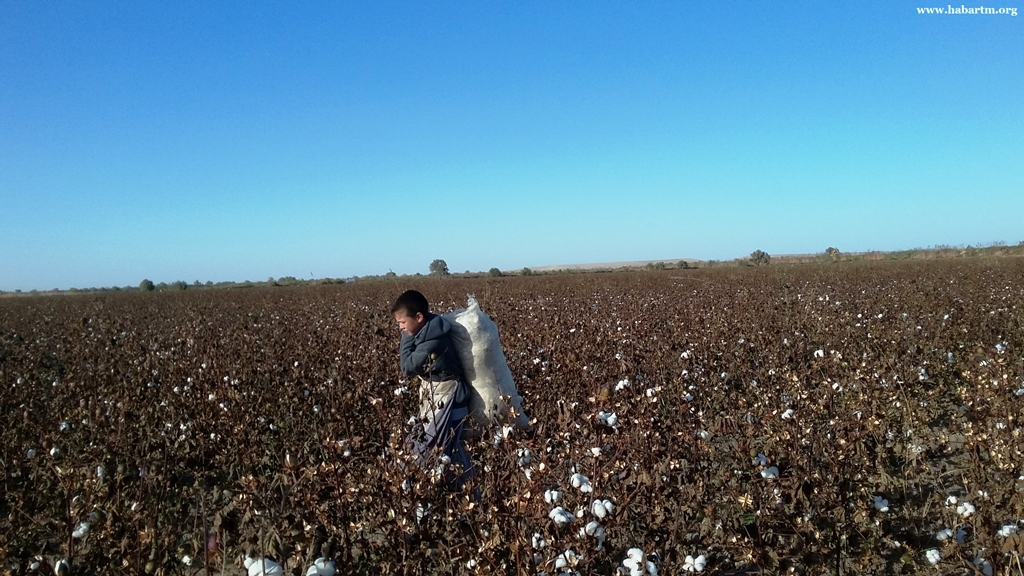 The President of Turkmenistan Gurbanguly Berdimuhamedov has publicly harangued officials for slow progress towards the national cotton production target four times during this year’s harvest. Each time the President has demanded officials respond with urgent action. In turn, regional governors have pressed harder on district officials, public-sector administrators, and company managers to mobilize more people.

The President’s specific orders have left many officials with little else to do than send more people to the fields. As ATN reported in October, President Berdimuhamedov ordered officials to immediately defoliate the cotton plants after discovering the harvest was behind scheduled, on September 18. An employee at the Agricultural Aviation Service (AAS), the agency responsible for flying the planes to spray the defoliant, has since explained that the President’s demand was simply not feasible. Pilots are responsible for covering their own costs, and the farmers neither earn enough to pay for the flights nor have big land plots to hire a plane. Furthermore, applying defoliants requires approvals by the regional and district administrations, farmers’ association, the state-owned agrochemical supply company Turkmenhimia, motor transport agency, and environmental protection agency.

“Even if a farmer has the money, various approvals take way too long. Sometimes it goes like this: a farmer goes for some defoliant to a chemical storage facility, but the people he needs are not there: as it turns out, they have been sent to cotton fields,” said the AAS employee. 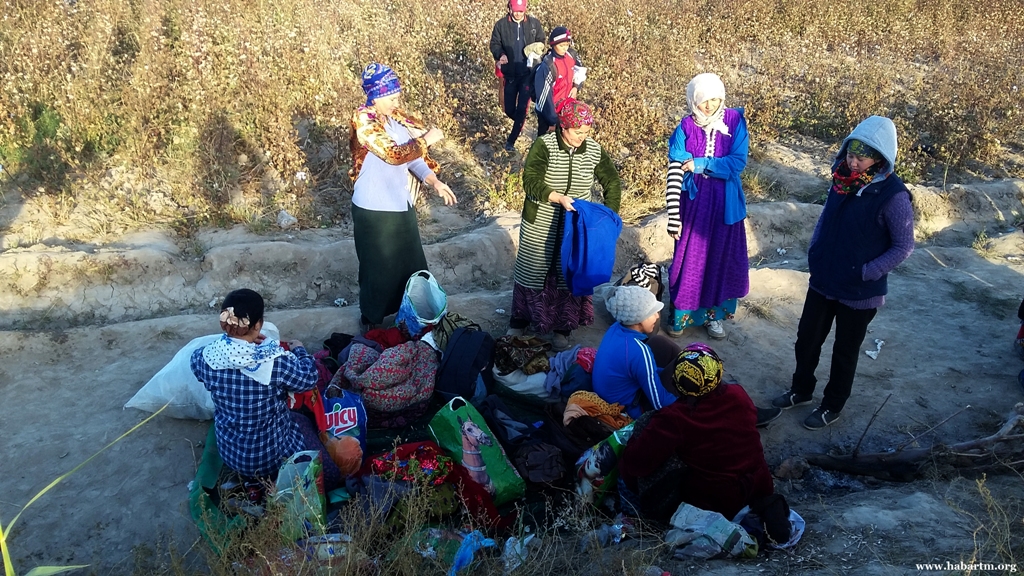 Again on September 21 and 29 and October 12, the President criticized regional governors for the slow pace of the cotton harvest. He named several districts and ordered the governors to speed up the harvest. Despite the President’s demands to “boost the pace,” “develop an action plan,” “analyze the causes,” and “wisely distribute the labor and promptly redeploy the equipment,” as of October 14, most districts have not yet fulfilled their harvest targets. Only the Geokdepe district in Akhal region has announced successful completion of its portion of the national plan and delivery of 7,409 tons of cotton.

After the President openly criticizing everyone for a low cotton crop, farmers reported concerns about what the government will do when they are unable to deliver the state-assigned production quotas. In 2014 and previous harvests, the state-controlled Farmers Associations have reprimanded a farmer the first time they fall short of production quotas and taken away the farmer’s lease to farm the land the second time. This year a flood, drought and broken irrigation system have reduced the cotton harvest below the national production plan, making it impossible for many farmers to fulfill their cotton quotas.

In July, the Amu Darya river flooded, inundating cotton fields in several areas of Lebap, one of the main cotton-growing regions. Farmers and agronomists in the region reported that no insurance was paid to farmers whose land was flooded, and they will incur massive debts to the government for their state-assigned cotton quotas that they could not possibly deliver.

In contrast, farmers in Dashoguz region lost productivity due to an intense drought during the summer months and dysfunctional irrigation system. Temperatures reached 50 degrees Celsius. No water was available for a month to farmers in the Kunyaurgench, Ruhubelent and Gurbansoltan Eje districts. The irrigation system pumps did not work due to power outages.

«Because of this, the plants stopped growing, and flowers and seeds dropped. In our area alone, parts with low cotton plants with only one or two pods take up about 7.3 thousand hectares. One picking is all you get — there is no more cotton left,» said a local official of Gurbansoltan Eje district. 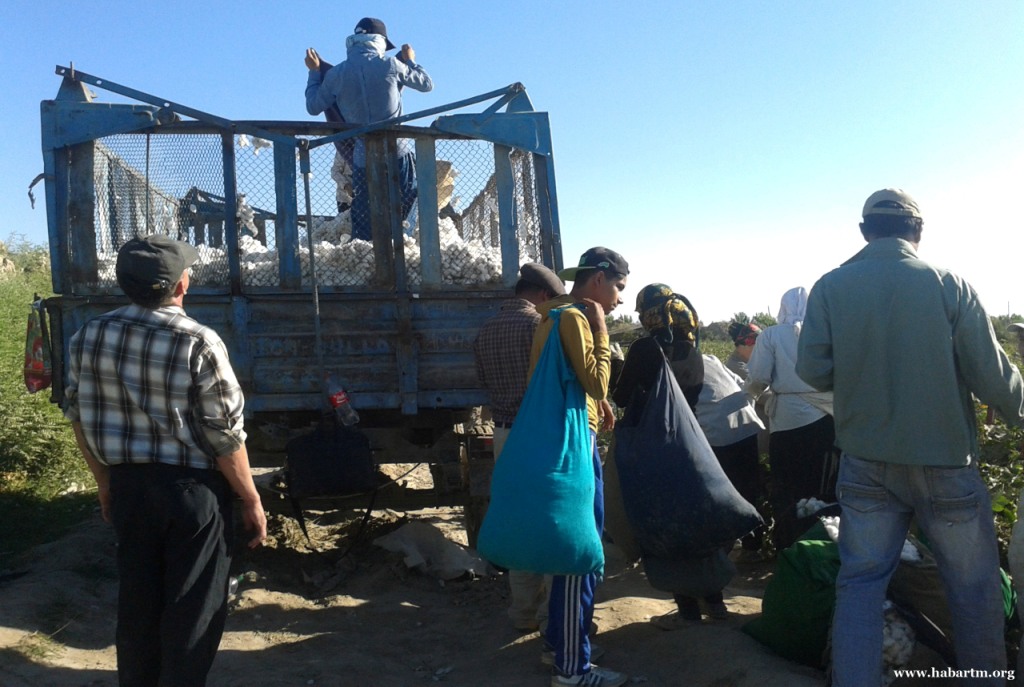 Farmers in Mary region also suffered crop loss due to malfunctioning irrigation systems. The farmers associations Pendi, Yashlyk and Azatlyk in Tagtabazar depend on pumps to deliver water from the nearby Gash and Rabat-Kashang canals.

«The crops lost buds and seeds. The farmers sounded the alarm. They complained to the authorities, but no one was willing to help us with our problems and concerns,» said a farmer of the Pendi association.

The Ministry of Agriculture was aware that the cotton crop would fall short of the national production target. A ministry employee reported that tests conducted in August found 83% of the cotton plants would likely yield less than the average rate. The study found that 55% of the plants would yield 7-13 tons of cotton lint per hectare, far short of the rate used to establish the national plan, 20-30 tons per hectare. The Ministry presented the finding to the Deputy Prime Minister of Turkmenistan, who oversees the cotton industry.

It remains to be seen how the central and local government officials will respond to the harvest shortfall at the end of the season.