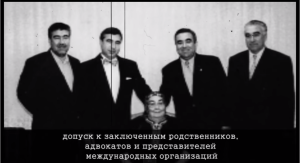 Yklymov family. Screenshot from «The Disappeared in Turkmenistan—Prove They Are Alive!» video

(Geneva, August 29, 2014) – Dozens of people have been forcibly disappeared in Turkmenistan, some for more than a decade, a coalition of human rights groups called the Prove They Are Alive! campaign said today in connection with the International Day of the Disappeared, which is on August 30, 2014. The government of Turkmenistan should immediately inform the relatives of the disappeared of their fate and whereabouts and allow them access to their loved ones.

Most of the disappeared were sentenced to lengthy prison terms in several massive waves of arrests and unfair trials on trumped-up charges that took place at the end of the 1990s and early 2000s. In many cases, their families have been able to learn nothing about them from the government since. Many are former officials who fell out of favor with the former government.

“After more than a decade of silence from Turkmen authorities, many families of the disappeared simply don’t know whether their loved ones are dead or alive,” said Kate Watters, executive director of Crude Accountability, an American nonprofit organization working on human and environmental rights in the Caspian and Black Sea regions and a member of the campaign. “The government should end their ordeal and at the very least tell the families of the people it has locked up whether their loved ones are dead or alive.”

The United Nations designated August 30 as the International Day of the Disappeared to raise awareness about enforced disappearances around the world. The Prove They Are Alive! campaign is a coalition of human rights groups from 25 countries that seeks to end forced disappearances in Turkmenistan. Governments and international organizations around the world should press the Turkmen government to end its silence, the coalition said. The Turkmen government should allow full and ongoing access to the imprisoned people by their families, lawyers, and representatives of appropriate independent bodies, including the International Committee of the Red Cross and relevant United Nations experts.

“In the year since we launched the campaign, a number of states, intergovernmental organizations, and people from Turkmenistan and many other countries have supported our call for fundamental rights to be restored to the disappeared and their loved ones, said Yuri Dzhibladze, president of the Center for the Development of Democracy and Human Rights, a Russian group and member of the campaign. “Now it’s time for the Turkmen government to act.”

Turkmenistan is one of the most repressive countries in the world, virtually closed to independent scrutiny. Media and religious freedoms are subject to draconian restrictions, human rights defenders and other activists face the constant threat of government reprisal, and the government uses imprisonment as a tool for political retaliation.

Families of the disappeared have had no official information about the fate, whereabouts, or health of their loved ones since their arrest and trial. The authorities have allowed neither correspondence nor visits. In several cases, in a form of collective punishment, the authorities have arrested the relatives of the prisoners, had them fired from jobs, confiscated their property, or denied them permission to travel abroad.

In most cases, the disappeared are former high-level government officials who fell out of favor with the government of Saparmurat Niyazov, the first president of Turkmenistan. For example, Tirkish Tyrmyev, former head of the border service, was sentenced in 2002 to 10 years in prison on abuse of office charges. In 2012 the authorities extended his sentence by an additional seven years for allegedly violating prison rules.

Some were charged in relation to an alleged coup attempt in 2002 against Niyazov, who died in 2006. They include the former speaker of parliament and dean of Turkmenistan’s main law school, Tagandurdy Khallyev, and the former ambassador to the Organization for Security and Co-operation in Europe, Batyr Berdyev, both of whom were arrested in 2002 and sentenced to 20 years in prison. Others are Serdar Rakhimov, former head of Turkmenistan’s state television company, sentenced to 25 years in prison in 2003, and a former foreign affairs minister, Boris Shikhmuradov, sentenced to 25 years after a one-day trial in December 2002 and a few days later convicted to a life sentence through an extrajudicial decision of the Khalk Maslakhaty (National Council).

The practice of disappearances in prisons continues under President Berdymukhamedov. One of its victims, Gulgeldy Annaniyazov, a former Turkmen political prisoner who had lived in exile in Norway beginning in 2002, was arrested upon his return to Turkmenistan in June 2008 and was sentenced soon afterward to 11 years on charges that were not made public.

The complete lack of information for more than 10 years about the fate of their family members amounts to torture for the relatives, the Prove They Are Alive! campaign said.

“These people were sentenced, however unfairly, to prison terms, not to death and oblivion,” said Lene Wetteland, program officer of the Norwegian Helsinki Committee and another member of the campaign.

Enforced disappearances are absolutely prohibited under international law and are a grave crime subject to universal jurisdiction for the purposes of prosecuting those responsible. They constitute flagrant and serious violations of rights enshrined under the International Covenant on Civil and Political Rights (ICCPR) and the Convention against Torture, to which Turkmenistan is a state party. These include great threats to the right to life; the right to freedom from torture or cruel, inhuman, or degrading treatment; the right to liberty and security; the right to recognition as a person before the law; and the right of all detained people to be treated with humanity.

The Human Rights Committee, the UN body that oversees governments’ implementation of the covenant, has repeatedly held that enforced disappearances violate multiple provisions of the ICCPR and in particular that being held indefinitely without contact with one’s family and the outside world constitutes a violation of the prohibition on torture and inhuman and degrading treatment.

“As soon as he took office, Berdymukhamedov should have put an end to enforced disappearances,” said Rachel Denber, deputy Europe and Central Asia director at Human Rights Watch. “An enforced disappearance is a crime that continues as long as the person remains missing, with no information about their fate or whereabouts. The longer Berdymukhamedov waits to act, the more deeply complicit his government becomes in perpetuating this terrible abuse.”

For more information on the Prove They Are Alive! campaign, please visit: http://provetheyarealive.org/

In Moscow, for the Center for the Development of Democracy and Human Rights, Yuri Dzhibladze (English, Russian): +7-916-673-5153 (mobile)