Alternative Turkmenistan News (ATN) – the Netherlands-based NGO working to promote freedom of speech and human rights in Turkmenistan, continues to publish articles about the state of Turkmen prisons. These articles are based on the testimony of the former inmate Batyr, who spent almost six years in prison. The last part of his sentence Batyr served in the maximum security labor camp LB-K/11 near the village of Seydi in Lebap province. 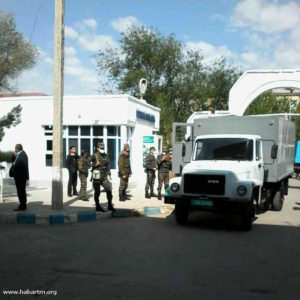 Inmates with TB brought to hospital in Mary

Prisons in general are no resort. However, Turkmenistan’s labor camps are unique in this regard. They are extremely overcrowded, which contributes greatly to the spread of infectious diseases and high death rates among inmates. Tuberculosis (TB) is the number one health risk in the prison system. There are special fenced-in barracks for inmates with TB, but they are overcrowded too. In order to get a transfer to the MR-B/15 prison hospital near Mary, one has to be on the brink of death, or pay a “small fortune.”

According to Batyr, prison tuberculosis is underreported in the official statistics, and this is done for the sole purpose of making things look good for international organizations.
This is confirmed by the information ATN obtained in April. On March 22, infirmaries of all correctional facilities, detention centers and the notorious Ovadan-Depe prison (officially known as AH-T/2 facility) received an order to take 65 percent of their TB patients off the register. The order was given «for improvement of the statistical data.» Most of the inmates suffering from this infectious disease were transferred from the special TB barracks to the common area, where they are currently living together with healthy inmates. This happened at least in two correctional facilities: Bayramaly prison camp MR-K/16 and maximum security labor camp LB-K/11.

«Inmates are openly told that Turkmenistan needs to get some sort of certificate from the World Health Organization. The head of our camp said so, plain and simple: you might as well drop dead here, no one will know anyway,” Batyr said.
According to information obtained by ATN, the person in charge of LB-K/11 is B.Polatov [full first name not known], who replaced Major Murad Nurgeldyev in this position. The fate of the latter is unknown.

Given the overcrowded living conditions and poor nutrition in the camp, this arrangement where TB patients live alongside healthy inmates risks new outbreaks of the disease. At present, the prison is home to approximately 2,300 inmates. Due to the lack of bunks, many have to sleep on the floor in the corridors.

According to Batyr, deaths among inmates often occur due to abuses by the prison management at LB-K/11. For example, on April 15, a large commission arrived from Ashgabat, and in order to prevent the inspectors from meeting the inmates, the latter were held for 12 hours straight in an open-air pen on each of the two days that the commission was there. As a result, dozens of people fainted, and two elderly prisoners died of a heart attack.

Between March 2015 and March 2016, approximately 30 inmates are known to have died in LB-K/11 from cardiovascular diseases. ATN knows the names of 15 of them. The youngest of the deceased was born in 1967, and the oldest in 1948. During the same period, 63 people died from cardiovascular diseases in the prison hospital near Mary. Earlier, all of these inmates had been transferred there for treatment from LB-K/11.

Unfortunately, ATN doesn’t have such information on all prisons and labor camps, and it is impossible to collect, as officials keep a tight lid on all morbidity and mortality data. The correctional staff, including the medical personnel, has to sign a non-disclosure agreement, and is under constant pressure from the management demanding that they always keep their mouths shut.

Earlier ATN reported that the National Security Ministry ordered to jam mobile signal in prisons. The article can be found here. 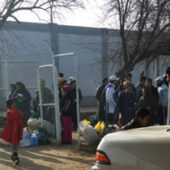