Alternative Turkmenistan News (ATN) has received the below appeal in the Turkmen language and translated it into Russian and English. It was sent by Hekim Hajiev, an ordinary mechanic working in the Repair and Maintenance Department of the Turkmenneft state oil company in Balkanabad. Hajiev appeals to the President of Turkmenistan to inform him about consistent violations of the law carried out by certain individuals, and wonders why not a single official body has been able or willing to put an end to it.

Hekim Hajiev is aware of the potential consequences of this publication, but his sense of justice, willingness to safeguard public property and belief in the civic duty do not allow him to remain silent. At the extended meeting of the Cabinet of Ministers held on 15 July, President Gurbanguly Berdymuhamedov directed state authorities to review appeals and complaints sent by citizens of Turkmenistan and respond to them in a proper manner. However, in many years Hajiev has not received any adequate response from the controlling bodies. ATN hopes that this publication will attract President’s attention to this pressing issue.

ATN will be closely monitoring Hekim Hajiev’s further plight. His appeal has been translated into English for the attention of ATN’s foreign readers – human rights advocates, diplomats and representatives of international organizations.

An appeal to the President of Turkmenistan Gurbanguly Berdymuhamedov

I am appealing to you as an ordinary citizen, and my statement is driven by very important reasons. But first let me assure you that by sending this letter through international human rights organizations I do not intend to discredit in any way my homeland that I love deeply, or you personally. This is my civic duty, and I have no choice but to appeal directly to you in the situation where I have nothing else to hope for, and no one else to rely upon. Besides, I do not wish to be perceived by my descendants as a coward.

I’m writing this appeal about the situation that has developed in the Repair and Maintenance Department of the Turkmenneft state oil company in the city of Balkanabad. Azat Gajarov, the Department’s head, has created a ring of subordinates who are either former law enforcement officials, or have relatives working in power structures. They cover each other’s backs to hide the fact that their boss embezzles public property, submits false reporting, lies and disguises unlawful actions if these come into the open.

One of Gadjarov’s people is Gurban Annaev, the Department’s lawyer, a former deputy prosecutor of Balkanabad who had been fired for bribery together with the city’s prosecutor Aman Chommanov. The oversight agency has proof of multiple high-profile violations committed by these people, and such a person now serves as a lawyer! Supported by his former colleagues, he is taking every effort to make sure that complaints about activities of the Department are not adequately addressed. 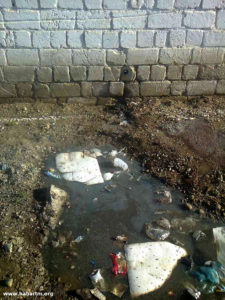 Gurban Annaev has also started his own business – he has opened a canteen on the premises of the Department that sells alcohol and cigarettes during work hours. Because of unhygienic conditions and violations of procedures for food storage and cooking, 40 employees of the Department had come down with food poisoning. However, the ever-powerful lawyer was able to cover it up and close the matter.

Another former offender, Atash Hallyev, had been dismissed from the taxation service following your official order, Mr. President. Today he works as Department’s chief accountant, while his brother works at the municipal prosecutor’s office.

Pirimguly Gurbanmuradov, engineer of production site #2, was nicknamed Gestapo for beating up and insulting his subordinates. He enjoys his impunity, as his brother is deputy chief of the Balkan province police department.

Guarded by this circle of protectors, Department’s head Azat Gajarov conceals criminal actions and makes sure that all our complaints receive one answer: “the facts have not been confirmed.” Besides that, the administration blocks all appeals and petitions addressed to the President of Turkmenistan.

To substantiate my claim, here are some concrete examples of violations. Chief engineer Abdulla Amandurdyev and head of production site #2 Rahim Arazaliev bought a written-off 1966-built lathe machine for 5100 manats, and effected the transaction with forged documents stating that they bought a new machine for 52,250 manats. One could only guess where the rest of the money went. 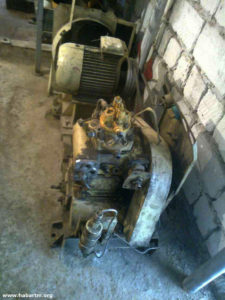 One of the written-off compressors

In June 2009, the Department signed a contract (number 42) with the Mary machine-building enterprise “Marymaşyngurlyşyk” to repair two industrial compressors. Our Department paid 34,500 manats for repairs, plus travel expenses and per diem for two employees. Our engineers could have fixed these compressors themselves (there were minor issues with the oil pump), but for some reason they were sent to Mary. The compressors were sent back to us in about three years, in October 2012, fully incapacitated, only to be written off later.

In 2010, nine BK-1500 air conditioners were stolen from our department. We have witnesses stating that R. Arazaliev, head of production site #2, was involved in the disappearance of these units. Following my appeal to the General Prosecutor’s Office, Azat Nazarov arrived to investigate the case of theft. However, he only took pictures of air conditioners installed in another production site and closed the investigation.

In 2012, in response to my numerous complaints about the pilfered gasoline in transport unit #6, the Turkmenneft company sent an investigation commission that selectively checked the amounts of gasoline distributed to the drivers in October and November of 2010. Comparisons of data in the drivers’ log-books, the actual routes and mileage revealed multiple falsifications: in just two months, 3635 liters of A-95 gasoline, 10,785 liters of A-80 gasoline and 5143 liters of diesel fuel were written off the balance.

However, these thefts were also covered up, as the 2010 trip logs were destroyed (61 items) and replaced by new ones in 2012, which means that Turkmenneft auditors had forged documents and helped the offenders to conceal their actions.

The unwarranted deductions of gasoline and forged logs remained common practice not just during these two months, but for many years. This practice continues today, with fuel being written off even to broken vehicles parked in the garage.

The commission ignored some other facts described in my complaint, such as, for example, the disappearance of new, company-purchased spare parts for cars and the fact that drivers have to buy spare parts at their own expense. And still, all the offenders still hold their positions and keep following the beaten path of embezzlement, with nobody to stop them. 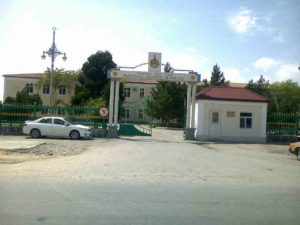 Numerous allegations submitted by Department’s staff meet a wall of silence – there is no reaction from the Turkmenneft oil company, the Supreme Chamber of Control, the relevant ministries or law enforcement bodies. On the contrary, Department’s authorities are harassing the appellants by pressing and even threatening them. The employees who complained to higher authorities now have to take measures to protect themselves from the police.

I have appealed to various official bodies to complain about unlawful actions in our Department, but instead of investigating them, they have launched a bullying campaign against me. Over the last years, following numerous false accusations, I was several times summoned to the prosecutor’s office and the court, where the so-called “witnesses” testified against me.

On September 1, 2015 just as I was approaching my workplace in the morning, a dog was deliberately set at me. I fell to the ground, and for five minutes had to fight the angry animal, until a passerby asked its owner to stop it. The owner pulled the chain and ran away. A week after this incident, two doctors visited me – Orazberdy Ishanov (Sanitary and Epidemiological Service) and Aigul Akmamedova (a family doctor). Sent by the Department of Healthcare of the Balkan province, they showed me a complaint allegedly written by my neighbors stating that I needed rabies treatment. However, it was an anonymous document with no signatures, and my neighbors couldn’t have seen me fighting with the dog, as it happened in the dark, far away from home.

Attempts to slander and defame me are continuing, as they try to press me to stay silent. The most recent attempt happened on July 11, when police arrived at my work and took me to the chief of the criminal investigation unit Aman Hajigurbanov. First they searched me to check if I had any sound recording equipment, and then the chief said that for my complaint to the Supreme Chamber of Control they could detain me for 15 days and even send to a mental clinic. “If you don’t stop writing up, we will do just that!”, he warned.

For such powerful people as A. Hajigurbanov I am just a nobody. They can forge accusations and put me to prison or a mental ward, they can beat me up into a cripple, they can hurt my family and turn their lives into a living hell. I tried to tell him that embezzlement of public property is a serious crime, but he made it very clear that he did not care about anything that happened in our Department, and all he wanted was to obtain the evidence that I had collected. Why does the chief of criminal investigation threaten me and try to take hold of the evidence, and, more importantly, for what purpose?

I am asking you to pay close attention to my application and the related investigation. I have in my possession about 5000 items of evidence of the described violations (video and audio materials, photos, CDs, etc.). I am asking you to send an independent commission to Balkanabad to investigate these facts under your direct order. I am also asking your personal assistance to protect the safety of my family and my own, and to insure against continuous threats and humiliation. We should not allow violence, impunity, lies, forgery, corruption, disparagement and injustice to rule our lives!