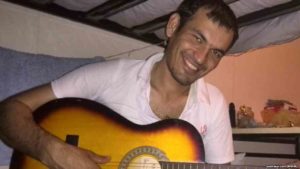 New York, December 6, 2016 — Turkmen authorities should release radio journalist Khudayberdy Allashov and cease retaliating against journalists with trumped-up charges, the Committee to Protect Journalists said today. Police in the Dashoguz region of northern Turkmenistan on December 3 arrested Allashov, a contributor to the U.S.-government-funded broadcaster Radio Free Europe/Radio Liberty’s Turkmen service, and charged him with possessing a banned substance. His employer learned about the incident yesterday.

According to RFE/RL’s Turkmen Service, locally known as Radio Azatlyk, police took the journalist, his mother, and his wife from his home to a nearby police station, where he was beaten and forced to confess to possessing 11 kilograms (24 pounds) of nasvay, a smokeless tobacco product, still widely consumed in Central Asia despite an official 2008 ban. Radio Azatlyk reported that a woman whom police alleged had sold Allashov the product said she had seen the journalist at the police station severely bruised and unable to hold up his head or to speak. The broadcaster said several other witnesses confirmed the woman’s account. The journalist’s wife told RFE/RL that Allashov had confessed under duress, and could face up to seven years in prison.

«We are deeply troubled by media reports that Turkmen police beat a so-called confession out of an investigative journalist that could put him behind bars for the next seven years,» CPJ Deputy Executive Director Robert Mahoney said. «The authorities should drop any plans to prosecute Khudayberdy Allashov and stop their intimidation of all journalists whose only ‘crime’ is embarrassing those in power by uncovering wrongdoing.»

Allashov joined Radio Azatlyk in October 2016. RFE/RL in its statement said that Allashov had reported under the pseudonym Mekan Tashliyev. Under that name, the journalist had reported on forced labor during the recent cotton harvest, a food shortage in the Dashoguz province, and delays in paying public salaries.

«Over the last 18 months our reporters have been arrested, held incommunicado, beaten, interrogated, threatened, and arbitrarily jailed, and we hold the Turkmen government responsible,» he said in a statement yesterday.

Police on October 25 questioned Soltan Achilova, a Radio Azatlyk contributor based in the capital, Ashgabat, after she photographed people in a line outside a supermarket. After police questioned her, unknown assailants physically attacked and robbed her, the advocacy group Human Rights Watch reported. On November 8, women yelled at her that her photographs «pour dirt on Turkmenistan,» RFE/RL reported. Hours earlier, in an attack Achilova told her employer she believed was meant for her, women knocked another woman to the ground and beat her, saying, «This is for your pictures.»

Saparmamed Nepeskuliyev, a contributor to Radio Azatlyk and the independent news website Alternative Turkmenistan News (ATN), has been in jail since July 2015 on trumped-up charges.

Ogulsapar Muradova, Radio Azatlyk’s reporter, died in prison in 2006. Her body, bearing serious head and neck injuries, was returned to her family in September 2006, CPJ reported at the time. No investigation has ever been disclosed.

RFE/RL is the last foreign broadcaster to maintain a network of correspondents in the closed Central Asian state. Radio Azatlyk is the only source of Turkmen-language news available in Turkmenistan other than pro-government media.