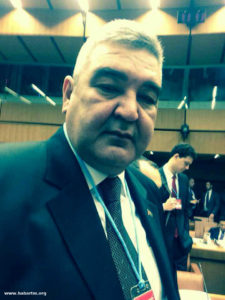 Aymurat Tadjiev, chief investigator at the Service for the Protection of Security of Healthy Society (former Drugs Police) died in his office on May 3, according to reports from Turkmenistan. The infamous law-enforcement officer was well-known in Turkmenistan for his brutality, ruthlessness and use of torture on suspects.

According to informed sources in Ahal region, Aymurat Tadjiev provided cover for the drugs business in his native town of Tejen, where he had a large family. This testimony sounds outrageous, considering the fact that Tadjiev was a chief investigator in the agency meant to fight against drugs.

Ironically, it was Tadjiev who was directly involved in persecution of Mansur Mingelov from the ethnic Baloch minority, whose fate ATN has been following for more than a year and a half. Back then, Tadjiev’s involvement in the fabrication of Mansur’s case was not made public, although the facts pointing to his involvement were numerous. Here is just one of many: when his junior ranking colleague Atamurat Dovletov refused to sign the investigation report, saying that the case against the activist had obviously been fabricated, Aymurat Tadjiev signed it in his place.

The reason behind Mingelov’s arrest and the long-term sentence was his exposure of the crimes of Turkmen drugs officials. According to Amnesty International, drugs officers crushed detainees’ bones with chisels, tore people’s scrotum with pliers, used electric shocks and beat them with chair legs and plastic bottles.

The case against Mansur Mingelov was fabricated within five days, and contained numerous discrepancies and inconsistencies. The court, however, found him guilty and sentenced to 22 years. Later, in prison, Mingelov went on an indefinite hunger strike in protest at the injustice, gaining the attention of international human rights organizations. His name appeared in press releases and reports of Amnesty International, U.S. Department of State and other institutions.

Now, one of those responsible for the tragic fate of Mansur Mingelov is dead…

According to ATN’s sources, Tadjiev was born in 1971, and suffered from severe diabetes and high blood pressure. On May 3, when he was at work, his blood pressure rose and he went into cardiac arrest.

One should never speak ill of the dead, but in his hometown of Tejen, few outside his family mourn his demise. People say that the former chief investigator of the Drugs Police got what was coming to him: God must have seen the tears of thousands of fathers and mothers of the innocent imprisoned on trumped-up charges and heard their curses.

One «dirty cop” has died, but, as we know from experience, there are many more of those in Turkmenistan.