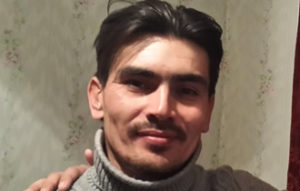 Gaspar Matalaev – resident of Turkmenabat and a relative of ATN’s editor Ruslan Myatiev, has been held in custody since October 5, 2016. In November the Turkmen court sentenced him to three years in prison on false “fraud” charges. The real reason behind his imprisonment is Matalaev’s involvement in the forced labor monitoring in Turkmenistan during cotton harvesting.

Matalaev confessed to fraud under torture with electric shocks.

Despite the fact that his charge is considered of medium seriousness and other people with the same charge have been pardoned both in December 2016 and in February 2017, both presidential amnesties bypassed Matalaev. This also points to the political nature of his persecution.

Gaspar Matalaev (34) – one of the forced labor monitors of Alternative Turkmenistan News (ATN), was arrested at night on October 4, 2016. On assignment from ATN he repeatedly visited collection points and traveled to the cotton fields to interview doctors, teachers and other public sector workers forced to pick cotton under threat of dismissal. He asked them why they go to pick cotton instead of teaching students or treating patients. Matalaev also spoke with children who had to miss school to replace their parents in the cotton fields or who served as hired workers to earn money to support their families. 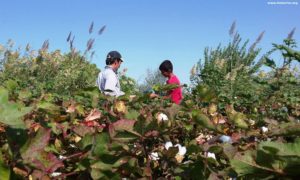 Matalaev in the cotton field in Farab region

On October 2 ATN published Matalaev’s first photo report from Farab region titled “They bring people to cotton fields in the back of a truck, like sheep for sale.” Two days later Turkmenistan’s president Gurbanguly Berdymuhamedov severely reprimanded the minister of national security Dovrangeldi Bayramov. The reason for the reprimand was Bayramov’s «improper performance of duties, weakening control over the activities of subordinate services.»

They demanded he went with them, bringing his mobile phone and that of his younger brother. The police said it “had to do with internet and photos.”

Several hours later Matalaev’s family tried to find out his whereabouts. They visited several detention centers until they learned that he was being held in the city police department. At around 3 a.m. the police called the family from Matalaev’s mobile phone and said that he would be freed in two hours. But this never happened to date. 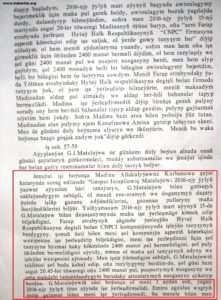 His family wasn’t allowed to see him though on October 6, 2016 the police promised a visit. They also asked the family members to bring a parcel for him with warm clothes and food. The parcel was accepted but the visit was denied. While awaiting this decision, the family noticed an ambulance arriving at the police. It is likely that the ambulance was called for Matalaev as there were only 2-3 other people waiting for a visit.

Though he was held in the police, officers of the Ministry of National Security (MNS) interrogated him. They tortured Matalaev with electric shocks. He confessed that he sent cotton photos to the spouse of ATN’s founder and editor. The officers asked questions about his second-hand minivan: how did he buy it, did he have a sponsor and did ATN ever pay him for conducting forced labor monitoring.

Matalaev used to work as a city minibus driver. He bought the minivan when the family exchanged their 4-room flat to a 2-room apartment.

Criminal case and the court

All this time, until November 9, 2016, the MNS officers were preparing the fabricated a case against Matalaev. They studied his telephone contacts and text messages. In search of at least some compromising evidence, the MNS officers summoned and interrogated several of his friends. Eventually they decided to make Matalaev’s girlfriend, Madina Kurbanova, a “victim” and indicted him for “fraud.” 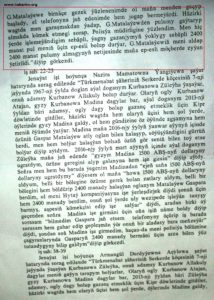 The charge states that allegedly on March 15, 2016 Matalaev fraudulently took 2400 manats ($685) from Kurbanova and promised to get her an assistant cook’s job within three months at the Farab branch of Chinese National Petroleum Corporation. He allegedly said he had contacts there.

From Kurbanova’s testimony (translated from Turkmen):

“However, when the agreed time approached, he did not employ me. On this occasion, I repeatedly turned to Matalaev, but he began to avoid me and did not answer my calls to his mobile phone. Now, tired of waiting, I asked the police department to recover my money from Matalaev. Due to the fact that I do not work anywhere and have no income, [the amount of] 2,400 manats is significant for me. The actions of Matalaev, who took money from me in the amount of 2,400 and deceived me, inflicted considerable damage on me.”

The “victim” herself was held in detention for 15 days, because she visited the cotton fields together with Matalaev in late September to conduct the monitoring. ATN has video evidence, which is published below. The question is how could Matalaev avoid her and not answer her calls if in the fall 2016 they visited the fields together?

ATN does not know if Kurbanova was tortured to testify like this. However, the fact that officers forced her to file a statement against Matalaev is beyond any doubt. The formal language, usually used in judicial documentation, is a clear sign that she wrote her statement under guidance. People in their regular life do not use such wording. After 15 days in detention Kurbanova was freed. At the court hearing she testified as a “witness” and once again repeated her claims.

Matalaev’s punishment is nothing but an act of retaliation against him for cooperating with Ruslan Myatiev – ATN’s founder and editor. It also targets ATN’s forced labor monitoring and reporting during the cotton harvest campaign in Turkmenistan over the previous four years. As a result of the reporting about forced labor, some foreign clothing companies stopped sourcing cotton or textile from Turkmenistan, and some western governments and rights organizations highlighted in their reports the existence of forced labor in the country.

At the same time, Matalaev’s entire family is now under surveillance. During the investigation, they kept noticing unfamiliar vehicles with tinted windows with men sitting inside, whom the residents of nearby houses have never seen before. MNS officers have noted down the personal information of all Matalaev’s relatives, including small children. Some of his relatives renounced Matalaev and his family.

ATN had hoped for the prudence of the Turkmen authorities and, on insistence from his family, we did not start to campaign for Matalaev’s release. His relatives had hoped that Matalaev would be released on December 12, 2016 then on February 19, 2017 but to their disappointment he was never freed. At the same time other prisoners charged with “fraud” were released during both amnesties.

ATN knows that the published photo report from Farab caused resentment at the very top of the Turkmen government. The chief of the MNS was severely reprimanded for this very reason. Some high-ranking officials from the regional security department have lost their jobs.

One of the questions addressed to the Turkmen delegation by the UN Human Rights Committee in Geneva on March 8-9, 2017 was about Gaspar Matalaev. However, the Turkmen officials left this and many other questions unanswered.

We urge the Turkmen government to release Gaspar Matalaev. His only “guilt” was that he documented the use of forced labor in Turkmenistan – precisely what the government persistently hides, including from the ILO and foreign clothing companies. 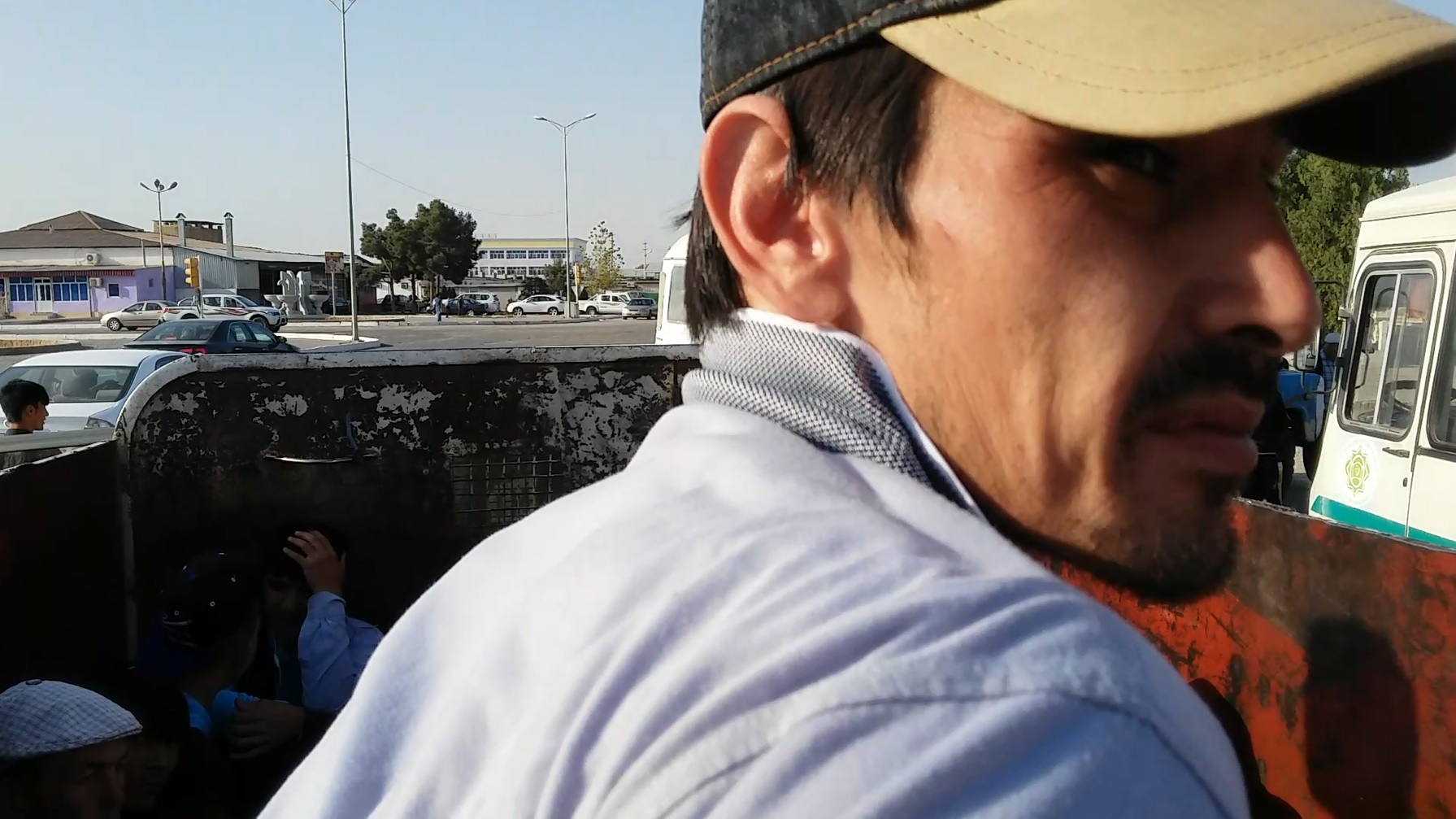