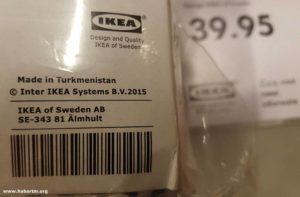 Retail giant IKEA said in a statement on July 20 it imposed a ban on cotton from Turkmenistan in its production line due to lack of “progress in the right direction” in terms of forced and bonded labor in the country.

IKEA had previously called Turkmenistan a “difficult” region to work with, although it did not reveal violations of labor rights in the country.

Since 2015, IKEA has implemented a pilot project in the country to «create a positive change» for the cotton industry. The company said that the project was limited to a group of local farmers and a single supplier in a specific region that supplied IKEA with one or two items. The project aimed to implement and ensure the full control over the supply chain in accordance with the Code of Conduct for IKEA suppliers.

“Our presence in the country has enabled us to train farmers and build competences and awareness on the importance of labor rights,” the company said.

During the two years of the project, IKEA said that it used both internal and external auditors to assess compliance with its Code of Conduct. While on the ground assessments at the farms were conducted during the cotton season, when workers were present on the fields, the company said that it did not find breaches to its Code.

However, referencing incessant reports on the use of forced and bonded labor, the company said it would not renew the pilot project in the country, adding that it failed to “progress in the right direction.”

“We want to see more concrete development examples of the decent work agenda in the entire cotton industry, in addition to an increase in transparency and openness of monitoring working conditions by independent international and local civil society organizations,” IKEA said.

The company also said that its ability to influence Turkmenistan’s cotton industry had been “limited”.

In October 2016, Gaspar Matalaev was arrested in Lebap province of Turkmenistan as he was monitoring the use of forced labor in Farab. Shortly after the arrest, he was sentenced to three years on trumped up charges of fraud and bribery. The UN Human Rights Committee, as well as several human rights organizations, called for Matalaev’s release.

Despite refusing to renew its project in Turkmenistan, IKEA said that its experience in the country was «successful.»

“We have had the possibility to work on the ground and with implementation of ILO [International Labor Organization] conventions and BCI [Better Cotton Initiative] principles with stakeholders all the way out to the cotton fields,” IKEA’s statement said.

However, until further notice, the company has imposed a ban on cotton from Turkmenistan (and Uzbekistan), and it now prevents the use of cotton originating from these countries in its products.

In its final remarks, IKEA also said that it does not exclude lifting the ban and returning to run projects in Turkmenistan “should the situation improve.”

Turkmenbashi Textile Complex was IKEA’s supplier in Turkmenistan and produced beddings under the names «Malou» and «Nyponros» (see photo), ATN’s sources said. IKEA sold these products in many stores across Europe.

ATN’s remark: We welcome the decision from one of the largest retailers in the world to stop purchasing cotton and textiles from Turkmenistan, a country with one of the worst records of forced labor. Other global brands had previously banned Turkmen textiles, such as H&M and Inditex – which owns Bershka, Pull & Bear, Zara, Massimo Dutti and others. ATN urges other buyers of Turkmen textiles and cotton to follow suit and impose a ban on Turkmen cotton or textiles. The Turkmen authorities must finally realize that the practice of forcing tens of thousands of people to pick cotton is unacceptable in the modern world. And, notably, that activists reporting instances of forced labor and violations of labor laws must not be imprisoned. 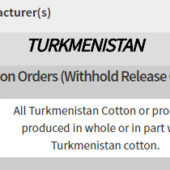 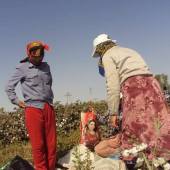